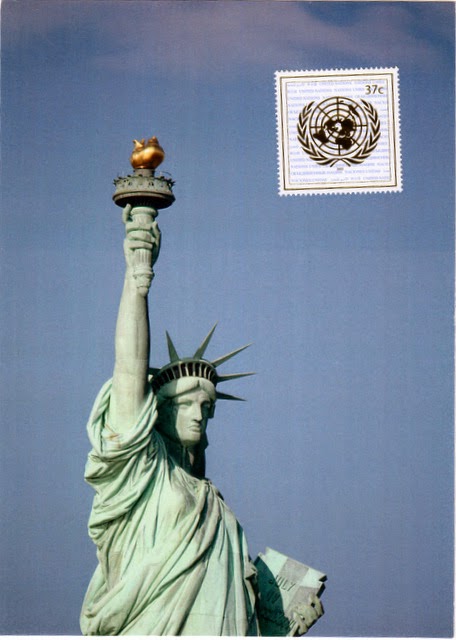 When I was assigned postcard US-2921298 to Maine, the recipient stated her loves of poetry in the profile and asked to include a line of a poem on the card. What came to my mind was from the Answer by a Chinese poet Bei Dao (北岛, born August 2, 1949 in Beijing): "卑鄙是卑鄙者的通行证，高尚是高尚者的墓志铭" that would be directly translated into: "Despicable acts are the passport for the Villain; Honorable deeds are the tombstone for the Noble." As Bei Dao is the most notable representative of the Misty Poets (朦胧诗), a group of Chinese poets who reacted against the restrictions of the Cultural Revolution (1966-1976) in China, he opens his 1976 poem by reflecting what a twisted world was where the Villain got a free pass and the Noble was met with death. You can read the full poem with English translation in a blog on sciencenet.cn or a blog on sina.com.cn.

Bei Dao has won numerous awards, including the Swedish PEN Tucholsky Prize, International Poetry Argana Award from the House of Poetry in Morocco, and the PEN/Barbara Goldsmith Freedom to Write Award. He is a foreign honorary member of the American Academy of Arts and Letters, elected in 1996. He has been nominated several times for the Nobel Prize in Literature.

While China is moving toward a more open and free society, thanks to many advocates like Bei Dao, it is not lost on me that such a twisted world could exist anywhere where the power is absolute and without supervision. That's why we need to vigorously safeguard our civil rights and civil liberties so that we can maintain a society where the Villain will be punished and the Noble will be honored.
Posted by twimbk at 8:59 PM