From Las Vegas with Love

Since the Chinese New Year (Sunday, February 10, 2013) and the Valentine's Day (Thursday, February 14, 2013) is only four days apart, This Happy New Year card is perfect to mark both occasions. Two snakes, commemorating the Year of Snake, form a heart-shaped love symbol, with the Paris Las Vegas Hotel in the background.
The U.S. Postal Service issued a Sealed with Love (Forever®) stamp on January 30, 2013 showing an envelope fastened with a red wax seal where a small heart enclosed inside a larger heart.

In Las Vegas, the Chinese New Year has earned an increasing recognition as the longest and most important festival in the Chinese calendar with great appeal to many visitors. The maxi card features the Year of the Snake Display at the Conservatory and Botanical Gardens in Bellagio, with a "Lunar Year of the Snake 2013 (forever) stamp issued on January 16, 2013, postmarked with the official first-day-of-issue cancellation from San Francisco. As seen on the card and the stamp, firecrackers are fired during the celebrations to scare off evil spirits and usher in renewed hopes for the coming year. 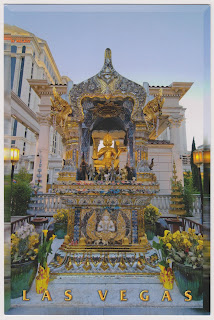 Postcard US-2032250 to Thailand shows the Brahma Shrine at Caesars Palace in Las Vegas. It is a replica of one of the most famous Buddhist shrines, the Erawan Shrine at the Grand Hyatt Erawan Hotel in Bangkok, Thailand.

At the first glance, it may feel strange to see the shimmering blue-and-gold motif among the surrounding white pillars of Roman Square. Nonetheless, since donated to Caesars in 1984 from Thai newspaper tycoons Mr. and Mrs. Kamphol Vacharaphol and Mr. Yip Hon, a prominent figure of Hong Kong, the Shrine has become a symbol of prosperity and good luck. It features a statue of Phra Phrom, the Thai representation of the Hindu god Brahma. The four faces of the Brahma statue represent the Four Divine States of Mind: Loving Kindness or Benevolence (慈), Compassion (悲), Sympathy or Empathetic Joy (喜), and Equanimity (捨).

The Shrine was cast in bronze and plated in gold, weighted more than 360 kilograms or 8,000 pounds and measured 4.3 meters or 14 feet tall. It was dedicated twenty nine years ago today on February 5, 1984 under the supervision of Buddhist monks. It is open to people of all faiths as explained by the full inscription of the shrine's plaque.
Posted by twimbk at 1:00 AM No comments: