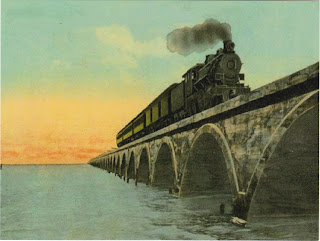 On January 22, 1912, the first train from mainland Florida reached Key West through the Florida Overseas Railroad, an extension of the Florida East Coast Railway, in operation from 1912 to 1935.

Until today 101 years ago, Key West is an isolated outpost reachable only by boat. Standard Oil tycoon Henry Flagler conceived the railroad that stretched more than 160 kilometers or 100 miles into open ocean, and the construction began in 1905. Similar to William Andrews Clark, who built the Los Angeles and Salt Lake Railroad that went through Las Vegas in 1905, Henry Flagler was a visionary who made remote destinations accessible to both passengers and freight.

You can read the Last Train to Key West to learn how the train services ended in September 1935.


Update: The Postcard showing a train traveling along the Florida Overseas Railroad was later sent to Brasil as US-2501260.
Posted by twimbk at 12:00 PM No comments:

President Dwight D. Eisenhower signed the Alaska Statehood Act on July 7, 1958. It led to Alaska's admission into the Union on January 3, 1959, becoming the 49th State. Juneau, the territorial capital, was formally recognized as the state capital, and William A. Egan was sworn in as the first governor.

These shaped cards were purchased in 2003 when I attended the ASPRS annual conference in Anchorage. The glacier shaped card has been sent to Taiwan.

New Year's Fireworks at the Stratosphere Tower in Las Vegas

Watching fireworks to ring in the New Year is perfect; Watching the fireworks shooting from a 1149-foot (350-meter)-tall tower is even better. At midnight on the New Year's Evening, fireworks were launched  from the Stratosphere Tower along with six other casinos and hotels: MGM Grand, Aria, Planet Hollywood, Caesars Palace, Treasure Island, and the Venetian. In all, more than 80,000 fireworks were on display named "America's Party" as 330,000 visitors were celebrating the beginning of 2013 in Las Vegas.

You can customize and purchase this postcard at Zazzle.com.