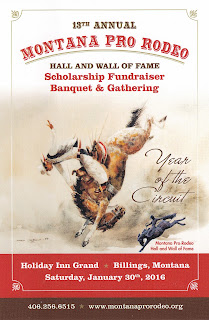 The 13th annual Montana Pro Rodeo Hall and Wall of Fame Scholarship Fundraiser, Banquet and Gathering will be held today on January 30, 2016 at the Holiday Inn Grand in Billings, MT. It is the largest state high school rodeo scholarship program in America.

Holiday Inn Grand, one of the largest hotels in Billings, was recently sold for 7.85 million dollars at an auction and is in the process of conversion to Radisson.

I picked up this event card at the 2015 National Finals Rodeo in Las Vegas.

Cobb Hall at the University of Chicago 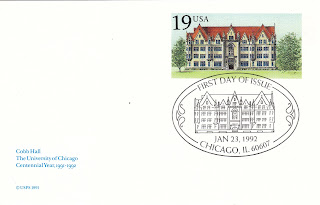 On January 23, 1992, USPS issued a stamped postal card with a 19-cent pre-printed stamp to commemorate the Centennial of the University of Chicago. The card features the first building completed on campus in 1892 - Cobb Hall, named after benefactor Silas Cobb. Designed by Henry Ives Cobb (not related to Silas Cobb), the building was modeled after the Gothic style featured prominently on the Oxford University campus in England. It currently hosts the humanities and social sciences, as well as the Center for the Study of Languages, and the Renaissance Society Contemporary Art Museum.

The first-day-of-issue postmark, cancelled from the city of Chicago, IL, also features an outline of Cobb Hall. 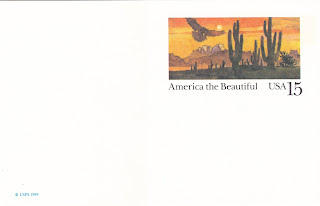 The second postal card in the America the Beautiful series was issued January 13, 1989 in Tucson, Arizona. The design features an eagle soaring over the Sonora Desert in the golden glow of sunset. The 15-cent stamped card was the first philatelic item of 1989 by USPS.
Posted by twimbk at 11:52 PM No comments: 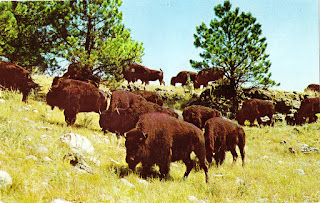 Postcard US-3761486 to Germany is a vintage card showing Custer State Park, a state park and wildlife reserve in the Black Hills of southwestern South Dakota. On the back of the card, it reads: "Custer State Park is one of the largest State Parks in the U.S.A. It contains 128,000 acres of wonderful scenery, consisting of mountains, picturesque gorges, beautiful lakes and streams. 90,000 acres are under fence, and roaming unmolested within this enclosure are Buffalo, Elk, Deer, Big Horn Sheep, Rocky Mt. Goats and Antelope."

Wikipedia lists the park area as 71,000 acres. Founded in 1912 and named after Lt. Colonel George Armstrong Custer, the park has an annual buffalo roundup and auction in September, where buffaloes are rounded up, with surplus sold at auction so that the remaining number of animals can be sustained by the rangeland forage. However, those "buffaloes" are actually American Bison as shown on the card.
Posted by twimbk at 7:24 PM No comments: