Mount McKinley reflects in Reflection Pond in Denali National Park and Preserve in this shaped card. Mount McKinley is the highest mountain in North America with a summit elevation of 20,320 ft or 6,194 m above sea level. I got this shaped card in Anchorage when I attended the ASPRS annual conference in 2003.

For those who collect US quarters, The  the United States Mint issued a Denali National Park Quarter, showing a Dall sheep with Mount McKinley in the background, as part of its America the Beautiful Quarters Program on November 5, 2012. 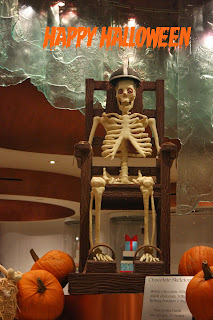 Postcard US-1925565 to Latvia shows a life-size chocolate skeleton at Jean Philippe Patisserie in Bellagio Hotel and Casino in Las Vegas currently on display for the Halloween. The 1.65 m or 5'5" skeleton sits on a chocolate electric chair. It was made of 35 kg white chocolate, 30 kg dark chocolate and 1.5 kg rolling fondant by two talented pastry team members who spent more than 70 working hours. They also have miniature chocolates in the shapes of black cats, ghost, and witches. The photo was taken on October 12, 2012.
Posted by twimbk at 11:30 PM No comments: 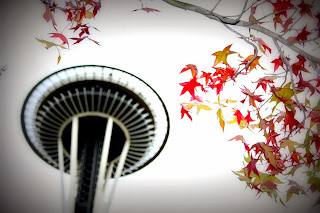 From the top of the Needle, the panoramic view reveals the downtown Seattle, the Olympic Mountains, the Cascade Mountains, and Mount Rainier, Elliott Bay and surrounding islands. The Space Needle was designated as a historic landmark by the Landmarks Preservation Board of the City of Seattle on April 19, 1999.
Posted by twimbk at 3:33 PM No comments: 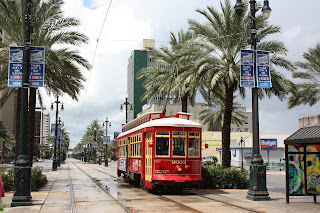 Postcard US-1720411 shows a red streetcar on the Canal Street Line near downtown New Orleans, LA on September 6, 2010. There are currently three additional operating streetcar lines in New Orleans: The St. Charles Avenue Line, the Riverfront Line, and the Loyola Avenue Line. The St. Charles Avenue Line is the longest of the four and the oldest continuously operating street railway system in the world since the first half of the 19th century in 1830s, only interrupted by Hurricane Katrina between August 2005 and December 2006.
Posted by twimbk at 10:55 AM No comments: 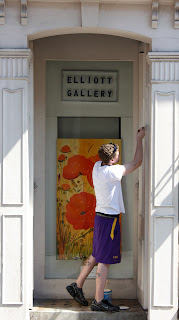 The photo was from a stop at New Orleans two years ago on September 5, 2010 prior to my All-You-Can-Jet (AYCJ) trip by JetBlue. I flew in from Las Vegas one way on Southwest, and left for Portland, Maine via JFK next on a Jetblue AYCJ pass.
Posted by twimbk at 11:20 AM No comments:

Sunset at Bellagio Hotel and Casino 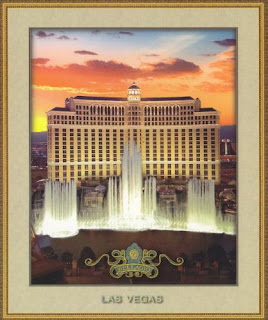 Postcard US-1555333 reached Portugal in 12 days. It shows a beautiful sunset view at Bellagio, a luxury hotel and casino in Las Vegas, Nevada, USA. The design was inspired by the Lake Como town of Bellagio in Italy, It is famous for the large music water fountain on an 8-acre or 3.2 ha lake, as shown in front of the hotel on the card. I usually come here to watch New Year's fireworks.
Posted by twimbk at 11:59 PM No comments:

A Regal Great Egret at the Everglades US-1505382 was the very first card I sent out. It features a regal great egret in the Everglades, Florida, USA.  I picked up the card, issued by the South Florida Water Management District, for Marleen1979 from Netherlands as she said she liked birds. The regal great egret, once nearly destroyed for its fashionable plumes, is a symbol of conservation today.
Posted by twimbk at 9:18 PM No comments:

The first time I heard of the Postcard Crossing Project  was from its member TooMore in January 2011. Although I was too occupied/distracted at the time and did not join right away, TooMore was kind enough to exchange a postcard with me. I became really intrigued by October 2011 thanks to Dodd, when we did a direct swap. However, a couple of more months had passed before I was fully active. I wish I started sooner. But, hey, later is better than never. Now, you can find me on PostCrossing.
Posted by twimbk at 8:51 PM No comments: