The Difference One Vermonter Can Make 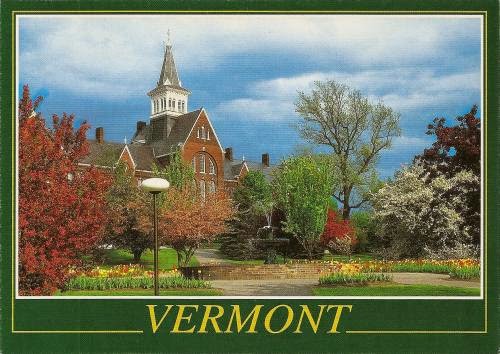 James Merrill Jeffords, a former U.S. congressman and senator from Vermont, passed away today on August 18, 2014, at age 80. He broke with the Republican Party in 2001 to become an Independent, which created an unprecedented power shift in the U.S. Senate and gave Democrats control of the chamber for 18 months.

With his single-handed tipping of the balance of power on Capitol Hill, Jeffords drew the wrath of Republicans as then-senate majority leader Trent Lott of Mississippi angrily called his action "a coup of one."

However, he became a hometown hero in Vermont, with his decision to leave the GOP spawning a "Thanks, Jim" bumper sticker. A Vermont brewery named an ale for him called "Jeezum Jim" which was a reference to his modest nature and Vermonty accent, citing "a celebration of conviction, courage, and the difference one man can make."

Postcard US-2215732 from Vermont shows the Old Mill, a landmark at the Central Campus of University of Vermont in Burlington. Public education was among the programs that the senator championed. He also supported an increase of the minimum wage and President Clinton's failed comprehensive health plan overhaul.
Posted by twimbk at 4:58 PM