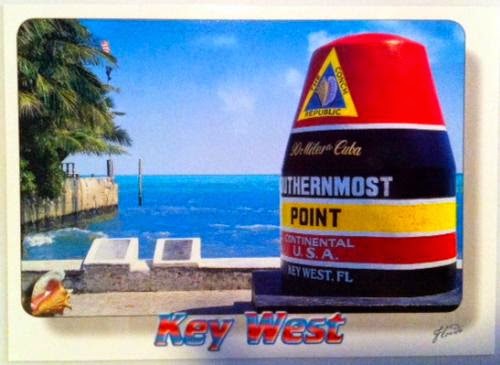 Postcard US-1777075 from Florida shows the Southernmost point, a painted concrete buoy at the corner of South Street and Whitehead Street in Key West. Established by the city to mark one of the extreme points of the United States in 1983, it is one of the most visited and photographed attractions in Key West, Florida.

However, according to Wikipedia, the buoy was actually an old sewer junction that was dug up in the area and found too heavy and too large to move. Also, the official southernmost point in the contiguous United States is Ballast Key, a privately owned island south and west of Key West, which prohibits unauthorized visitors. On the Key West island, its true southernmost point, 270 m or 900 ft farther south to the buoy, is located on the Truman Annex property, a U.S. Navy installation inaccessible to the public. The southernmost part of Key West Island accessible to the public is located at Fort Zachary Taylor Historic State Park, 150 m or 500 ft farther south than the buoy. In addition, the claim on the buoy stating "90 miles to Cuba" is a rounded number, since Cuba, at its closest point is 94 statute miles or 81 nautical miles due south.


In the news today, a South Florida judge declares state's ban on same-sex marriage unconstitutional. Although the ruling only applies to Monroe County, the most LGBT-friendly county that covers Key West, and expects an appeal, it highlights the ban violates the 14th Amendment of the U.S. constitution, which guarantees equal protection under the law.
Posted by twimbk at 3:32 PM