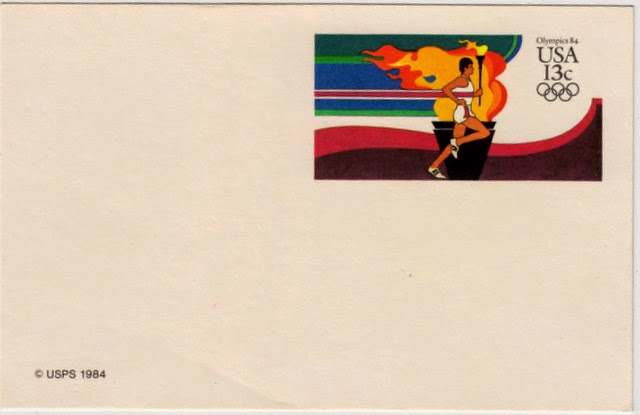 Postcard US-2776584 to Belarus was a 13-cent stamped postal postcard issued by USPS, featuring a runner with an Olympics torch, for the 23rd Summer Olympic Games which opened in Los Angeles, CA 30 years ago on July 28, 1984.

In retaliation to the U.S.-led boycott of the 1980 Summer Olympics in Moscow, 14 countries including the Soviet Union, Cuba and East Germany boycotted the 1984 Summer Games. Iran and Libya also boycotted for different reasons.

The Olympic Committee led by Peter Ueberroth imposed financial constraints on the games budget by using existing facilities as much as possible. As a result, the 1984 Summer Olympics became the first financially successful modern Olympic Games. Some of the profits were used to endow a foundation to promote youth sports in Southern California, educate coaches, and maintain a sports library.

Los Angeles hosted the Olympic Games previously in 1932.
Posted by twimbk at 11:53 PM