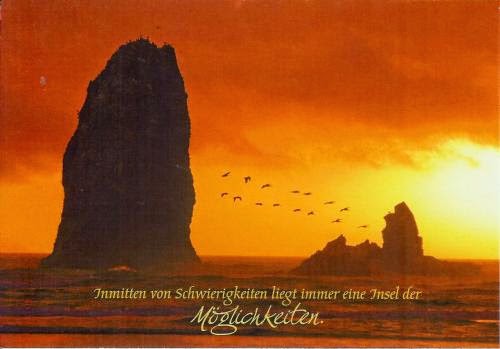 The caption on postcard DE-3212323 from Germany says "Inmitten von Schwierigkeiten liegt immer eine Insel der Möglichkeiten." This German proverb means "in the midst of difficulties, there is always an island of options."

A similar Chinese proverb "车到山前必有路，船到桥头自然直" can be directly translated into "When you get to the mountain, there'll be a way through; when you get to the pier-head, the boat will go straight with the current." Therefore, Don't worry too much beforehand; let's deal with it as it happens. Everything will turn out for the best in the end.

Another Chinese proverb "水到渠成" is the best for describing Germany's crowning at the 2014 FIFA World Cup today: "When water flows, a channel is formed." When conditions are mature, success will come. At the final match, Germany felt the heat from Argentina in the 22nd minute of the match when Argentinian forward Gonzalo Higuain intercepted the ball from German midfielder Toni Kroos and was one-on-one with German goal-keeper Manuel Neuer. Also, at the second half, Lionel Messi, Argentinian captain and forward, posed a threat for a goal with his left-footed curling shot.

When the match headed towards extra-time, history was against Germany as Argentina had never conceded a goal in the extra-time before. However, German super-substitute Mario Götze broke the dead-lock with the help from another substitute André Schürrle. The Germans are the 2014 FIFA World Cup champions, winning the Trophy for the fourth time after overcoming Argentina 1:0 at the Maracana in Rio de Janeiro, Brazil.