Today is International Tiger Day, an annual celebration on July 29 to raise awareness for tiger conservation. It started in 2010 at the Saint Petersburg Tiger Summit in Russia. The most recent estimate shows only 3,200 tigers still in the wild, including 500 Siberian tigers. 95% of the total population have disappeared in the past 100 years; three subspecies: Bali , Caspian and Javan, have already been extinct by 1940s, 1970s, and 1970s respectively.

Habitat loss has been a direct contributor for the tiger population decline. Tigers lost 93% of their natural habitat due to human activities including deforestation, urbanization, and agricultural expansion. Climate change is also a factor as rising sea levels threaten to wipe out the last remaining habitat of Bengal tigers in the Sundarbans, a large mangrove forest area between India and Bangladesh on the northern coast of the Indian Ocean. Therefore, It is ultimate important to protect the natural habitats of tigers for tiger conservation to be successful.

USPS issued the Save Vanishing Species stamp featuring a tiger cub on September 20, 2011, with its net proceeds from sale benefiting the U.S. Fish and Wildlife Service’s Multinational Species Conservation Funds. The Funds in turn supports efforts by numerous conservation organizations, including WWF which implements conservation projects such as surveying tigers and their prey in Nepal. 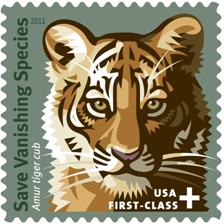 The featured postcard was sent from Connecticut as US-2140597.
Posted by twimbk at 7:28 PM