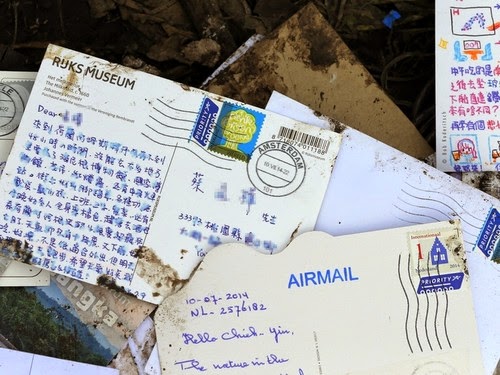 As shown in the exhibition "Fire & Ice: Hindenburg and Titanic" at the National Postal Museum in Washington D.C. during the period from March 22, 2012 to January 6, 2014, a large number of mails were lost when Hindenburg and Titanic ended in disasters, both of which not only served as the mass travel tools for people but also operated as the world's largest mail carriers at the time.

When the Malaysia Airlines Flight MH17 was shot down over Ukraine on July 17, 2014, all 298 passengers on board were killed. Seen from a photo on the crash site, were some burnt airmails and postcards. One postcard had its PostCrossing ID NL-2576182 visible. Alerted by a post by purplestarfish on the forum, a PostCrossing moderator replied "Postcrossing has contacted the sender of this postcard, to let him know that his card probably won't arrive. We're keeping an eye on other postcards, sent from Netherlands to Taiwan around the same date, which might have been on the same bag of mail."

This tragedy highlights the human costs to innocent travelers inflicted by military conflicts. The incident of lost mails also shows, in a small but vivid way, that such "regional conflicts" do have global impact on people who do not have direct relationship with the flight or the region where the conflicts occur. Time for peace.
Posted by twimbk at 10:15 PM