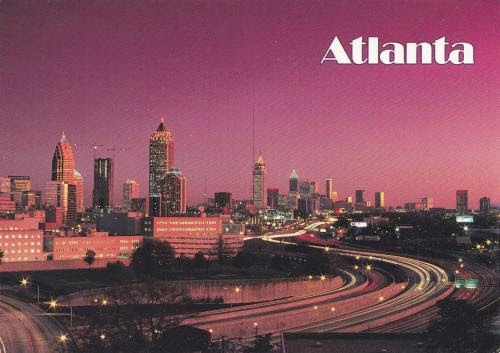 Jimmy Carter, Jr., the 39th President of the United States from 1977 to 1981 who was born October 1, 1924, turns 90 today on October, 1, 2014. Know as a peanut farmer, he served two terms as a Georgia State Senator and one term as the Governor of Georgia before elected President in 1976. As President, he created two new cabinet-level departments: the Department of Energy and the Department of Education, which were among those to be eliminated by Republican presidential candidate, Texas Governor Rick Perry in 2011 if he became President. Jimmy Carter was awarded the Nobel Peace Prize in 2002.

Postcard US-1555328 to Germany shows the skyline of Atlanta, Georgia where the Jimmy Carter Library and Museum and the Carter Center is located. It was among the first few official PostCrossing postcards I sent off.
Posted by twimbk at 11:58 PM