Marriage for All in Nevada 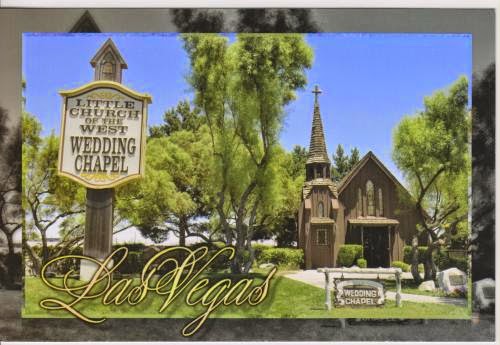 Nevada Governor Brian Sandoval and State Attorney General Catherine Cortez Masto announced this Tuesday evening that they would not appeal the ruling. The Marriage Bureau in Clark County, located at 201 Clark Avenue in the Regional Justice Center, will start to issue marriage licenses to same-sex couples at 2 p.m. Wednesday October 8, 2014. Now, Las Vegas can truly claim itself as the wedding capital of the world.

Postcard US-1864037 to Germany shows the Little Church of the West Wedding Chapel on the Las Vegas Strip in Paradise, Nevada. Built out of California redwood as part of the Last Frontier Hotel in 1942, it is the oldest building on the Las Vegas Strip. It had since moved several times until it was relocated to the current location in 1996. The wedding chapel was listed on the National Register of Historic Places on September 14, 1992. It is known for the 1964 movie Viva Las Vegas filmed at the Little Church of the West, where Lucky Jackson (played by Elvis Presley) and Rusty Martin (played by Ann-Margret) recited their vows.

Update 2: Supreme Court Justice Anthony Kennedy Justice Kennedy revised his order in the afternoon on October 8, 2014,  removing Nevada (case No. 12-17668) from the hold.