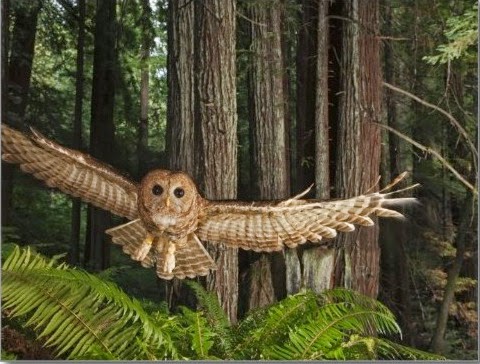 Outgoing postcard US-2869244 to Ukraine, sent on July 3, 2014, has since expired. It shows a tagged northern spotted owl in a redwood forest in California.

After I saw a Youtube video of an owl attacked by a hawk, I was curious about the difference between owls and hawks, all birds of prey. Owls belong to the order Strigiformes, with more than 100 species. On the other hands, hawks belong to the Accipitridae family within the order Accipitriformes. Owls are more active at night while hawks rule the day. That probably partially explain the timing of the above "attack." However, hawks do appear to be more aggressive and territorial. Another popular Youtube Video shows the dramatic moment of a hawk attacking a drone over Cambridge, Massachusetts recently, sending the quadcopter plummeting to the ground.