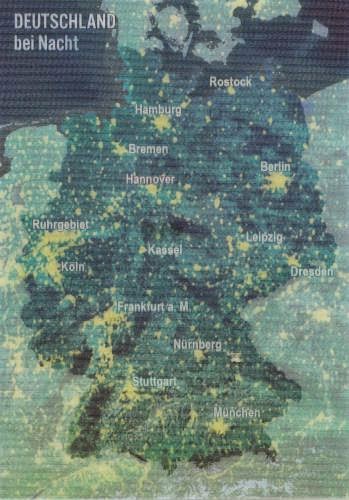 Today is the German Unity Day (Tag der Deutschen Einheit), the national day of Germany. Celebrated on October 3 every year, it is a public holiday that commemorates the anniversary of German reunification in 1990. The reunification process started as the Berlin Wall came down on November 9, 1989, and was formally completed on October 3, 1990. The German Unity Day, the national holiday of the Federal Republic of Germany, had been previously celebrated on June 17 since 1954. It was celebrated twice in 1990, once on June 17, 1990 and the other on October 3, 1990.

Postcard DE-1272658  was a lenticular 3D postcard. When viewing from different angles, it shows the reunified Germany by Day or by Night from space. It was also the first official PostCrossing postcard I received from Germany.
Posted by twimbk at 11:40 PM