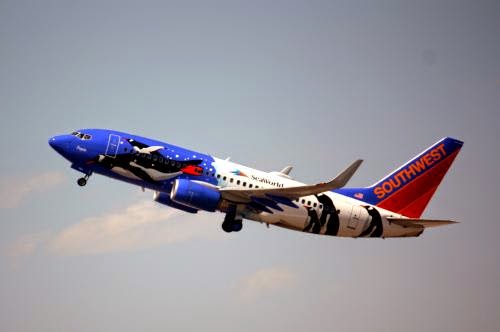 Postcard US-3014308 to Japan shows one of Southwest Airlines' specialty planes, Penguin One, taking off from McCarran International Airport in Las Vegas. It is the latest co-branded 737 jets under the partnership with SeaWorld since 1988. The current SeaWorld fleet includes Shamu Two, entering service on May 30, 1990; and Shamu Three, on September 7, 1990. The first jet Shamu One, introduced on May 23, 1988, has since retired.

However, animal rights activists have protested Southwest Airlines' relationship with SeaWorld for its treatment of the killer whales and other sea mammals in captive. Under the pressure from People for the Ethical Treatment of Animals and other animal rights groups, Southwest announced on July 31, 2014 that it would concluded its 26-year partnership with SeaWorld by the end of the year. Penguin One, just introduced to the fleet last year on June 20, 2013, will be painted back to the traditional Southwest color scheme along with Shamu Two and Shamu Three.
Posted by twimbk at 11:59 PM