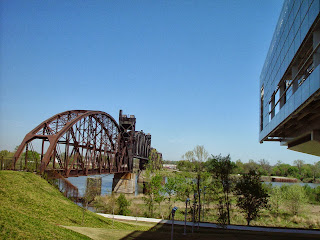 It is located on a 69,000-square-meter or 17-acre land by the Arkansas River and Interstate 30. The main building extends towards the Arkansas River, exemplifying Clinton's campaign promise of "building a bridge to the 21st century." The Clinton Presidential Center was dedicated nine years ago on November 18, 2004. The 1899 Rock Island Railroad Bridge across the Arkansas River, shown on the left of the postcard, was originally leading to Choctaw Station. It has been converted into a pedestrian bridge connecting to North Little Rock and renamed as the Clinton Park Bridge. The dedication ceremony was held on September 30, 2011, and the bridge was opened to the public on October 2, 2011.

The photo on the postcard was taken on April 10, 2006 When I was driving cross-country from West Palm Beach to Las Vegas. The postcard, mailed along with more than a dozen other cards including some private swaps, has traveled more than 30 days. All those cards mailed on that day appear lost in the mail, since none of the cards was received. I am in the process of  re-sending the replacement. So far, one replacement card was received. Unfortunately, some of those postcards are unique and do not have duplicates. 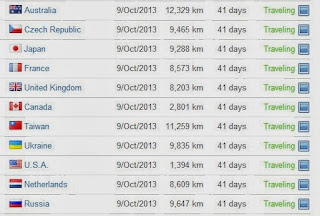