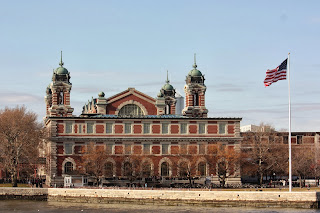 Postcard US-2452555 to Japan shows Ellis Island, gateway for millions of immigrants to the United States and the busiest immigrant inspection station in the country from 1892 to 1954. The island was made part of the Statue of Liberty National Monument in 1965. Together, Statue of Liberty National Monument, Ellis Island and Liberty Island was designated a U.S. National Register of Historic Place on October 15, 1966. The island has been closed to the public due to damages from Hurricane Sandy in October 2012. It is scheduled to re-open in 2014.

The photo on the card was taken during my trip to New York City with my BluePass by JetBlue on November 21, 2011. The postcard is overdue with a dozen of others (see my blog on November 18, 2012) that were sent out around October 14, 2012. A replacement card has been sent recently.
Posted by twimbk at 11:40 PM