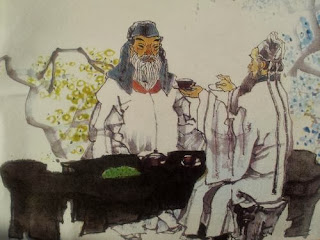 Postcard CN-769662 received last year was a handmade card of Su Shi (蘇軾/苏轼) (January 8, 1037 – August 24, 1101), a writer, poet, artist, calligrapher, pharmacologist, gastronome, and statesman of the Song Dynasty in China. One online collection site in Chinese has his more than 3400 poems.

My favorite piece was 念奴嬌: 赤壁懷古 "Remembrance of the Tale of the Red Cliff" that he wrote during his exile due to the political conflicts with the Prime Minister Wang An Shi.

大江東去 浪淘盡 千古風流人物
Eastward flows the great river, whose waves have washed away gallant heroes of eternity.
故壘西邊 人道是 三國周郎赤壁
West of the old fort stands the red cliff where General Zhou of the Three Kingdoms was said to have won his early fame.
亂石崩雲 驚濤裂岸 捲起千堆雪
Jagged rocks pierce the clouds, towering waves dash on the shore, rolling up thousands of piles of snow-like foams.
江山如畫 一時多少豪傑
While the river and mountains are picturesque today, I wonder how many heroes have battled with the landscape as the backdrop.
遙想公瑾當年 小喬初嫁了 雄姿英發
Imagine Zhou in his prime time, with Xiao Qiao the newly-wedded bride, He looked so handsome, brave and bright.
羽扇綸巾談笑間 檣櫓灰飛煙滅
With a plumed fan in hand and a silk cap on his head, he was laughing and jesting while the masts and sculls of Wei's navy went up in smoke and turned into ashes
故國神遊 多情應笑我
Wandering through the old kingdom like a dream, I might get laughed at for such sentiments.
早生華髮 人生如夢 一尊還酹江月
With my hair turning early gray, my life has been such a dream. Let me toast to the moon over its reflection in the great river.
Posted by twimbk at 11:57 PM