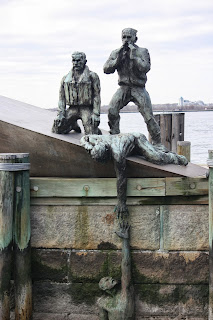 Postcard US-2489809 to Finland shows the American Merchant Mariners Memorial at Battery Park, New York City, near the line to board the ferries to the Statue of Liberty and Ellis Island. It was designed by Marisol Escobar, based on a photograph from a true event during WWII when a German submarine attacked and sank an American merchant vessel. The submarine surfaced and took photographs but did not pick up the survivors. All mariners were eventually lost in the Atlantic Ocean.

The memorial was dedicated on October 8, 1991.  The memorial depicts the after-attack scene where three mariners on a lifeboat, with one mariner trying to reach another mariner in the water, which is best appreciated by viewing the monument over time. At high tide you can only see the mariner in the water with a hand sticking out of the water; at lower tide you can see the hand and the mariners' head; and at the lowest tide his entire upper torso will show. As described at Lost At Sea Memorials dot com: "as ships pass by, the waves created give the memorial a sense of life and motion. The seaman’s head bobs above and below the water’s surface, as the arm of a seaman in a lifeboat strains to save his shipmate. Two others on the lifeboat are looking directly at the submarine, which will eventually submerge again and leave them for dead."

The memorial is considered an overlooked gem among the monuments in New York City. I have been to New York City and seen the memorials several times. However, it was not until my 2011 trip to New York City on the BluePass by Jetblue when I decided to take a closer look to learn what it was about. The photo on the card was taken on November 21, 2011.
Posted by twimbk at 12:31 AM