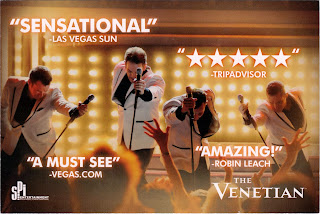 Postcard US-2452490 to Norway is an advertising card for Human Nature, an Australian pop music vocal group. It was originally formed in 1989 as the Four Trax by four schoolmates in Sydney. After signed by Sony Music and renamed as Human Nature, it released the debut album Telling Everybody in 1996. In Australia, the group has seventeen hits in the country's Top 40 music chart, and five hits in the Top 10; three of their albums reached multi-platinum certification, and four reached platinum; and sales of over 1.6 million records. After transitioning from a boy band to a Motown tribute group, they are currently performing at the Sands Showroom in the Venetian Hotel and Casino. (Human Nature will be DARK from November 28, 2013 to December 26, 2013)