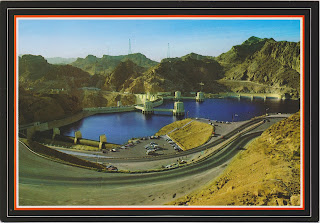 Daylight saving time (DST) ends today in the morning at 2:00 am. Following the expression Spring Forward, Fall Back, we set clocks back one hour, saying good bye to DST and entering Standard Time. DST returns next year on March 9, 2014.

Most areas of the United States currently observe DST. However, most areas of Arizona (except for the Navajo Nation, a Native American Reservation), along with Hawaii and the overseas territories of Puerto Rico, American Samoa, Guam, Northern Mariana Islands, and the United States Virgin Islands, do not observe DST. Arizona opted out the DST in 1968 largely in part because of Phoenix and Tucson being among the hottest US metropolitan areas in the summer. Extending daylight hours results in more people being active, thus more power usage from air conditioning units and cooling systems in homes and businesses.

Postcard US-2248458 to Tucson, Arizona showing Hoover Dam with Arizona side in the foreground and Nevada side in the background, as the state boundary runs across the dam. Since Arizona is in the Mountain Time Zone (GMT-7) whereas Nevada is in the Pacific Time Zone (GMT-8), Arizona is one hour ahead. However, because Nevada observes DST while Arizona does not, during the summer the clocks on the intake towers will show the same time. During the winter, the clock on the Nevada side will be one hour behind from the one on the Arizona side.