Vanished Sculptures Outside the Monte Carlo 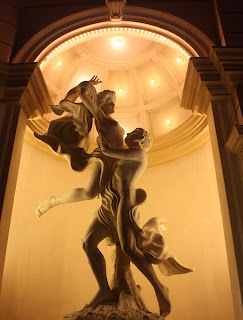 Expired Postcard US-1945392 to Belarus has reached its 365-day mark and is heading to the postcard graveyard. The postcard shows a sculpture outside the Monte Carlo Resort and Casino with a photo taken on October 12, 2012.

Those frolicking sculptures at the north Monte Carlo entrance were dismantled along with the European facade and famed fountain in June 2013 to make way for a large open-air plaza between the Monte Carlo and New York New York. It is part of the current trend that opens up casinos and converts external facades into profit-making entertainment venues with live entertainment, restaurants and retail stores, similar to what are happening in the MGM Grand and the Treasure Island,
Posted by twimbk at 1:00 AM