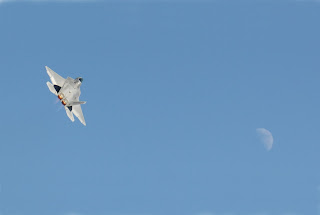 As part of the Veterans Day Celebrations, Aviation Nation, the annual open house and air show at Nellis Air Force Base near Las Vegas, was scheduled for November 9 and 10, 2013. However, due to government spending cuts, the U.S. Air Force has cut back non-critical activities. As a result, all air shows including Aviation Nation, have been cancelled.

Postcard US-2317852 to Malaysia shows a F-22 Raptor flying near an early moon in the late afternoon during the 2010 Aviation Nation on November 13, 2010. F-22 Raptor is a single-seat, twin-engine stealth fighter jet manufactured by Lockheed Martin Aeronautics, partnering with Boeing Defense, Space & Security.