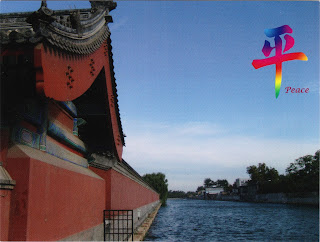 Postcard US-2378823 to Germany shows a section of the Forbidden City's outer wall and moat at its East Glorious Gate. The photo was taken on October 7, 2007 during my trip to Beijing, China.

The Forbidden City had been the Chinese imperial palace from the Ming Dynasty to the end of the Qing Dynasty for almost 500 years. It is now houses the Palace Museum. Built from 1406 to 1420, the Forbidden City, with 980 buildings on a 720,000 sq m or 7,800,000 sq ft ground, exemplifies traditional Chinese palatial architecture that has influenced cultural and architectural developments in East Asia and around the world.

The Forbidden City was declared a World Heritage Site in 1987 by UNESCO. The rainbow-colored character on the top right means "PEACE" in Chinese.
Posted by twimbk at 3:33 PM