The Knotted Gun: A Symbol for Peace and Non-Violence 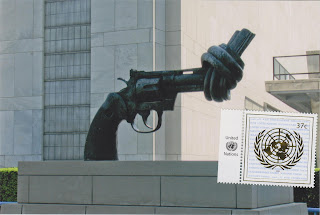 Postcard US-2373509 to Virginia, US shows the knotted gun, a bronze sculpture formally named as Non-Violence" and placed outside the United Nations Headquarters in New York in 1988. Kofi Annan, former UN Secretary General and Nobel Peace Laureate said: “The sculpture Non-Violence has not only endowed the United Nations with a cherished work of art; it has enriched the consciousness of humanity with a powerful symbol that encapsulates, in a few simple curves, the greatest prayer of man; that which asks not for victory, but for peace”.

The knotted gun was originally created as a memorial tribute to John Lennon for his vision of a world with less violence when he was shot and killed outside his home in New York City on the December 8, 1980.

In his song Imagine, John Lennon centered around the message of a world without violence and invite you to join the effort for Peace.

The Non-Violence sculpture has been placed at more than 30 strategic locations around the world so far, including, the Olympic Museum in Lausanne, Switzerland; the Waterfront in Cape Town, South Africa; and the Peace Park in Beijing, China. If you have a postcard or photo of the knotted gun sculpture in your country, I will appreciate it if you can send a copy to me.
Posted by twimbk at 1:00 AM