A Crow Lodge with Decorations 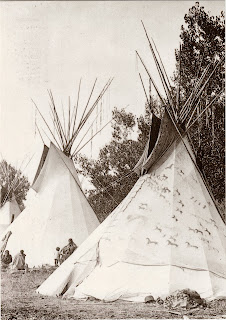 Postcard US-2424315 is going out to Germany today, showing Native American lodges photographed in 1907-1908 by Norman A. Forsyth. A lodge, or a large tipi, was formed of support poles covered with an average of 12 to 14 buffalo hides. By the 1870s, canvas had replaced the hides for tipi-making among some Plains Indian tribes.

According to Wikipedia, "the Plains Indians are the Indigenous peoples who live on the plains and rolling hills of the Great Plains of North America. Their equestrian culture and resistance to domination by Canada and the United States have made the Plains Indians an archetype in literature art for American Indians everywhere."
Posted by twimbk at 11:07 AM