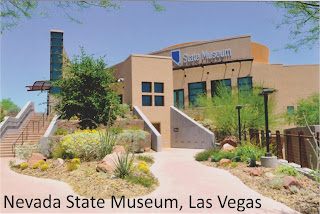 Postcard US-2260954 to Finland shows the Nevada State Museum, Las Vegas. The 1982 Museum opened on October 28, 2011 at the Las Vegas Springs Preserve in Las Vegas, Nevada after it moved from its previous location in Lorenzi Park.

The museum's permanent exhibits include the development of Las Vegas and the natural history of the area. Many interactive exhibits explain how geology shaped the Great Basin and Nevada; how the early flora and fauna survived and evolved; what Native Americans, pioneers, early settlers, miners, railroaders, ranchers and entrepreneurs had contributed to this area. There are some unique artifacts from the Hoover Dam constructions, the atomic testing era and the different stages of Las Vegas as the resort capital of the world.

The museum is open from 10 am to 6 pm, Thursday to Monday. It is currently participating in the Museums on US program sponsored by Bank of America that offers free admission to the Bank of America or Merrill Lynch credit/debt card holders on the first full weekend of every month. The free admission dates are September 7th and 8th, October 5th and 6th, November 2nd and 3rd, December 7th and 8th in 2013.