Survivor of a Mail Catastrophe 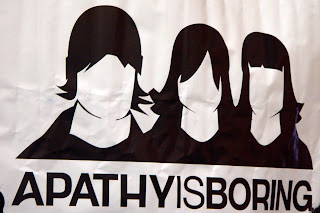 Postcard US-2373513 to Finland shows a poster "Apathy is Boring" from the third session of World Urban Forum, established by the United Nations to examine one of the most pressing issues facing the world today: rapid urbanization and its impact on communities, cities, economies and policies. The session was organized by the UN-Habitats and hosted by Vancouver, Canada from June 19 to June 23, 2006. The poster was to promote a broader participation of the world affairs from the youth generation. 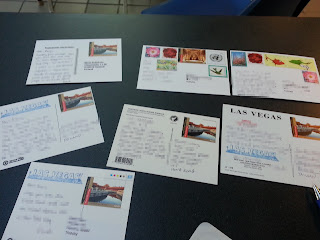 The postcard was put into an envelop, along with six other postcards all affixed with United Nations' stamps, to be sent to the United Nations Headquarter for cancellation and mailing. The envelop was posted at a post office counter in the afternoon on August 20, 2013. However, I received the empty envelop back at home next day, indicating the mail was damaged during the processing. 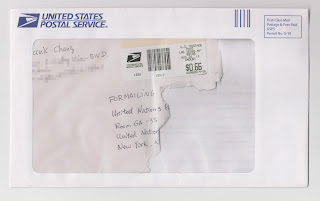 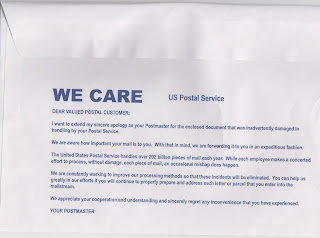 I went back to the post office on August 24, 2013 to ask about the contents of the damaged envelop. I was told they were likely destroyed in the accident. Unconvinced that all the seven postcards would be torn up beyond recognition, I asked what would happen in case any of the postcard was separated from the envelop but otherwise survived. Those postcards, with valid recipients' address but only United Nations' stamps which were not valid for mail directly through the United State Postal Service, became "items found loose in the mail". Since they did not have my return address and were separated from the damaged outer envelope, they couldn't be returned to me. I was told that if that were the case, they might end up at so call Dead Letter Office, officially the Mail Recovery Center in Atlanta, Georgia. I was given the Mail Recovery Center's address and a phone number to call. However, when I later read the Mail Recovery Center Guidelines, I realized that if they were domestic first class postcards, they would not be sent to the Mail Recovery Center since the value was less than 25 US dollars. They would be sent to waste or recycle locally. For foreign mails, their destination would be the "Exchange Office" (per IMM 772). However, my postcards were not exactly the (inbound) foreign mails. They were in fact mails without valid postage once they were separated from the outer envelop. So, I wasn't sure what happened to them. I was able to get the refund of 66 cents postage I paid for the 2 oz first class mail after filling out a refund request form.

To my surprise, the postcard reached Finland on September 3, 2013, without the intended UNPA's postmark, (as a matter of fact, without any postmarks). It appears to be sent through the "Exchange Office" as an item found loose in the mail. I also found this blog "the True Story of Undeliverable Mail" informational. To avoid become a victim of "mail catastrophe", follow the Boxing and Packing Tips at the end of the web page. Make sure to include a return address, even it's a postcard. So that it can be returned to you in case something happens. Register and insure your mail if it is important to you.
Posted by twimbk at 10:14 PM