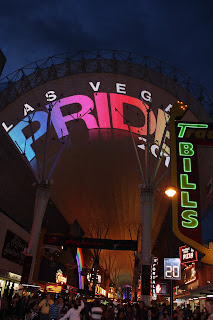 Las Vegas Pride Parade is one of the few, if not the only one, Pride Parades held at night. The 15th Annual Las Vegas Pride Parade will march up the 4th Street from West Charleston Blvd to Ogden Avenue starting at 8 pm on September 6, 2013 in downtown Las Vegas. The 2013 parade, presented by the MGM Resorts International and led by Grand Marshal Edward Padilla and Celebrity Grand Marshals from the cast of Divas Las Vegas, brings together the gay and straight business community, nonprofit organizations, LGBT service agencies, civic groups, and churches for a big celebration.

The postcard shows the banner of Las Vegas Pride projected on the giant Viva Vision LED display canopy at the Fremont Street Experience on April 30, 2010. The parade was changed to be held in September since.
Posted by twimbk at 4:00 PM