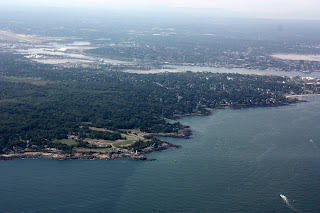 Postcard US-2333998 to Ukraine shows an aerial photo of Cape Elizabeth, Maine, taken from a Jetblue plane on approach to Portland, Maine on September 7, 2010. It was the first leg of my All-You-Can-Jet (AYCJ) trip from New Orleans, LA to Portland, ME with a transfer at JFK airport, NY.

Cape Elizabeth is a wealthy town in Southern Maine, with a population of 9015 as of the 2010 census, where the historical Portland Head Light is located. Visible on the lower-left center on the card, the lighthouse is predominant at the entrance of the primary shipping channel into Portland Harbor.Built from 1787 to 1791, it is the oldest lighthouse in the state of Maine. In 1872, an artillery base was built around the lighthouse to guard the entrance to the harbor. It was named Fort Williams in 1899 and remained active until 1962. It then became Fort Williams Park maintained by the town. The Park includes Portland Head Light and the former lighthouse keepers' house that currently serves as a maritime museum museum, remains of the military fort, the ruins of Goddard Mansion, and recreation facilities such as tennis and baseball courts. The lighthouse was added to the National Register of Historic Places on April 24, 1973. 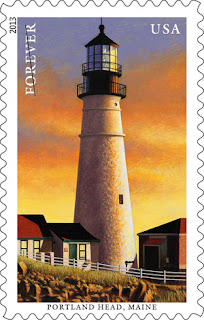