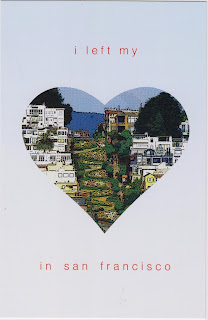 As a captured audience inside the Terminal 2 at the SFO International Airport waiting for my return flight to Las Vegas, I found a rack full of "I left my heart in San Francisco" postcards. Outgoing postcard US-3373240 to Ukraine was one of those that I obligatorily purchased. 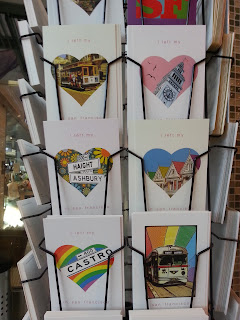 The card shows a section of Lombard Street in the Russian Hill neighborhood, a one-way block between Hyde Street and Leavenworth Street, known as the crookedest street in the world with eight sharp turns.

That section of Lombard Street used to be a straight, cobblestone street with a 27% grade which was too steep for most cars. The turns were built in 1922 so that people could drive up and down the hill, until the street was made one-way downhill in 1939. The street was paved with red bricks and about 250 steps were built on each side of the street to accommodate pedestrians.

Now, during the peak tourist season in summer, there are as many as 350 cars driving down the street each hour. However, it was not a popular tourist destination until the late 1950s. I drove down the street twice during my previous visit to San Francisco in 1999. This time, I took the Powell-Hyde cable car to the top of this block earlier today, and took the steps down to Leavenworth Street. 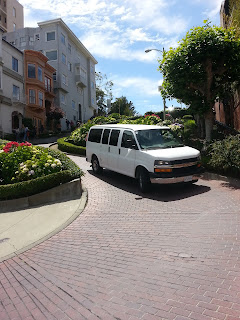