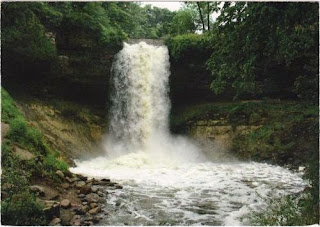 157 years ago, Minnesota became the 32nd state of the United States on May 11, 1858. It first became a territory of the United States in 1849. Then it submitted an application for statehood to President James Buchanan in January, 1858. However, distracted from a controversy about statehood of Kansas, Congress did not act on the application for several months before finally approved it. The state was created from the eastern half of the Minnesota Territory and part of the Wisconsin Territory. The name "Minnesota" was originated from a Dakota word meaning "clear blue water." The state is known as the "Land of Ten Thousand Lakes" due to its large number of lakes.

Postcard US-2269166 from Minneapolis, MN shows Minnehaha Falls, one of the most photographed sites in Minnesota with 850,000 visitors every year, at Minnehaha Park in Minneapolis, Minnesota. The park was designed by landscape architect Horace W.S. Cleveland in 1883, and was added to the National Register of Historic Places in 1969 as the Minnehaha Historic District.
Posted by twimbk at 11:56 PM