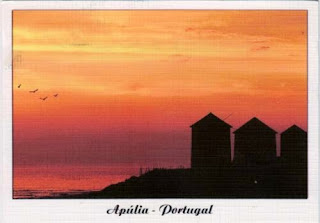 Postcard PT-368959 from Portugal shows Apúlia, a town with 4,323 residents and a former civil parish in the municipality of Esposende, Portugal. In 2013, the parish merged into the new parish Apúlia e Fão. It was a municipality by itself until 1834, when it was incorporated into Esposende. Apúlia is known for its dune beaches, as seen on the card, and Roman-style folk costumes, which may indicate its connection to the region of Apulia in Italy where a possible migration was originated during the Roman Empire.

May 17 is the International Day Against Homophobia, Biphobia and Transphobia. On May 17, 2010, President Aníbal Cavaco Silva ratified a law for legalization of same-sex marriage and became effective on June 5, 2010. Portugal became the sixth country in Europe and the eighth country in the world to allow same-sex marriage nationwide.
Posted by twimbk at 11:59 PM