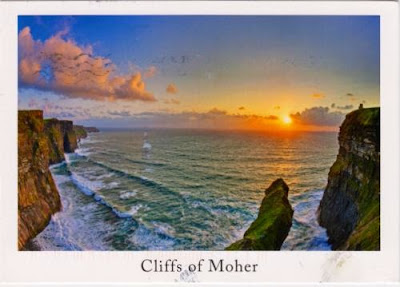 Postcard IE-78738 from Ireland shows a sunset view from the Cliffs of Moher or Aillte an Mhothair in Irish, located at the southwestern edge of the Burren region in County Clare, Ireland. According to Wikepedia, those cliffs rise 120 meters or 390 feet above the Atlantic Ocean at Hag's Head, and reach their maximum height of 214 meters or 702 feet just north of O'Brien's Tower, eight kilometers to the north. There is a round stone tower near the midpoint of the cliffs, built in 1835 by Sir Cornelius O'Brien, where visitors can see the Aran Islands in Galway Bay, the Maumturks and Twelve Pins mountain ranges to the north in County Galway, and Loop Head to the south. With almost one million visitors a year, it was one of the most popular tourist sites in Ireland.

A rainbow formed over Dublin in the evening yesterday as people in Ireland voted on a proposed constitutional amendment to legalize same-sex marriage. Final results indicated that 62% of voters and all but one district approved the amendment in a referendum Friday. It shows that support for marriage equality extended well beyond Ireland’s liberal urban centers and deep into its rural heartlands; and that a vote for same-sex marriage in Ireland is not a ‘No’ vote to Catholicism. Just as Prime Minister Enda Kenny proclaimed: “with today’s vote, we have disclosed who we are: a generous, compassionate, bold and joyful people.” Ireland became the first country to legalize same-sex marriage by popular vote in the world, joining 18 other countries (Netherlands, Belgium, Spain, Canada, South Africa, Norway, Sweden, Portugal, Iceland, Argentina, Denmark, France, Brazil, Uruguay, New Zealand, Britain, Luxembourg, and Finland) where same-sex couples can marry nationwide.