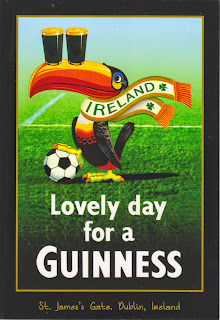 Outgoing postcard US-3373322 to China shows a vintage color poster advertisement featuring Guinness and a football (soccer) supporting toucan with an Irish shamrock scarf, with a tag line "Lovely day for a Guinness."

As for the 2014 World Cup in the recent news, the last two of the 12 stadiums built for the purpose of hosting the Brazil World Cup have finally been completed, 10 months after the tournament ended, while at least four others have either turned into a parking lot, been used by homeless people, or become other white elephants. The waste fueled the continued controversies about the amount spent on the 2014 World Cup and the 2016 Summer Olympics, which, as many protesters claimed, should have been used to deal with the poverty issues and to improve infrastructures in the country.
Posted by twimbk at 12:04 AM