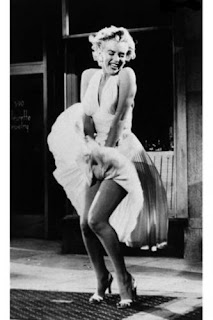 Postcard US-1852497 to Ukraine shows a 1955 movie scene with actress Marilyn Monroe appearing in the Seven Year Itch where her dress blows up from the subway grate. It becomes one of the most famous Marilyn Monroe scenes of all time. The subway grate is marked at East 52nd Street and Lexington Ave in New York City.

Fifty three years ago on Saturday May 19, 1962, Marilyn Monroe sung "Happy Birthday, Mr. President" for President John F. Kennedy at a celebration of his forty-fifth birthday, ten days before his actual date on Tuesday May 29, 1962.

Less than three months later, Monroe was found dead at her home at 12305 Fifth Helena Drive in Brentwood, Los Angeles, California on August 5, 1962. She was 36 years old.