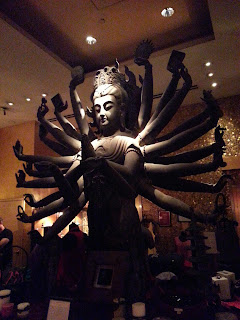 Postcard US-3287382 to Switzerland shows a statue of Avalokiteśvara (观世音), a bodhisattva who embodies the compassion of all Buddhas, who can be depicted, presented and portrayed in different forms in different cultures, even as either female or male.

The Thousand-armed Avalokiteśvara (千手观音) shown on this card was based on a prominent Buddhist story of Avalokiteśvara vowing never to rest until he had helped all who were suffering. However, in spite of his strenuous efforts, he was struggling to meet the needs of so many. Amitābha (阿弥陀佛), the principal buddha, seeing his plight, gave him eleven heads to comprehend the cries of the suffering and a thousand arms to magnify his capacity of aid.
Posted by twimbk at 11:59 PM