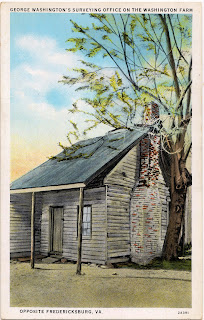 Outgoing postcard US-3373216 to Taiwan shows a vintage card of George Washington's Surveying Office on the Washington Farm, located along the northern bank of the Rappahannock River, across from the city of Fredericksburg, in Stafford County, Virginia.

However, archaeologists later found the building dated to the late 1800s, post Civil War. So it could not have been used by young George as a workshop. "The Surveyor Shed" was a subject of money making schemes by James Beverly Colbert and George Allen England who promoted the non-important structure as a genuine relic, in an attempt to profit from the land's associations with Washington in the 1920s.
Posted by twimbk at 11:55 PM