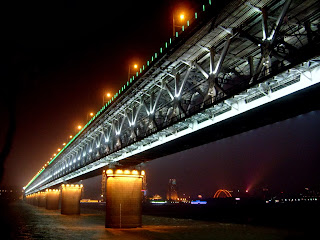 Postcard US-2293208 to Belarus shows the Wuhan Yangtze Great Bridge ( 武汉长江大桥) in Wuhan, Hubei Province, China with a photo taken on October 1, 2007. The double-deck road and rail bridge was the first bridge across the Yangtze River, the longest river in Asia and the third-longest in the world. It opened to public traffic fifty six years ago on October 15, 1957.

The Wuhan metropolis is an amalgamation of three cities located at the confluence of the Yangtze River and one of its branches: the Han River: Wuchang is located on the southern bank of the Yangtze; Hanyang is on the northern bank of the Yangtze and the west bank of the Han; and Hankou sits on the northern bank of the Yangtze and the eastern bank of the Han. Wuhan lies in the heart of Central China and has been a transportation hub between Beijing, the political and culture center in the north and the trading ports of Guangzhou and Hong Kong in the south. The Beijing-Wuhan railway line went into full service in 1906, followed in 1936 by the Wuhan-Guangzhou railway line. Before the bridge was built, train cars travelling between northern and southern China had to be ferried on barges over the Yangtze River, a laborious and time-consuming practice. Plans for the bridge's construction were first made in 1910; and four exploratory surveys were made between 1913 and 1948 for site selection. However, the construction did not start until 1955 due to economic constrains and the combination of World War II and the Chinese Civil War. The construction lasted for two years and was assisted by a 28-person delegation of engineers from the then Soviet Union.

Since then, there have been 60 bridges and 3 tunnels built by September 2013 over the 2,884 km or1,792 m main stretch of the Yangtze River, representing a broad array of bridge designs and significant achievements in modern bridge design and engineering.
Posted by twimbk at 9:25 AM