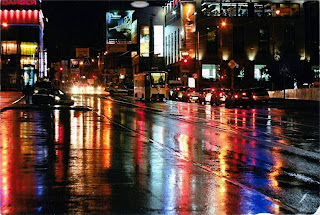 Postcard RU-2041729 from Russia shows the city streets after rain in Perm. the administrative center of Perm Krai, Russia. It is located on the banks of the Kama River in the European part of Russia near the Ural Mountains. According to the 2010 Census, its population is just a little under 1 million.

Perm's history can be traced back as far as the village of Yegoshikha in 1647. The current city was found in 1723. During the Soviet period, it grew as a major industrial city. Almost 80% of people in the city are employed in manufacturing. Currently the city is a major administrative, industrial, scientific, and cultural center.
Posted by twimbk at 11:43 PM