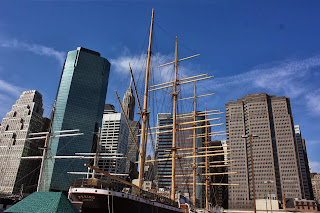 Outgoing postcard US-2452506 to Germany shows Peking, a steel-hulled four-masted barque which is a type of sailing vessel with three or more masts, at the South Street Seaport Museum in New York City.

Built in Hamburg, Germany in 1911, Peking is one of the famous "Flying P Liners" of F. Laeisz Lines. Used in the nitrate trade and wheat trade, Peking made voyages from Europe to the west coast of South America around the often treacherous Cape Horn with general cargo and returned filled with guano for use in the making of fertilizer and explosives. Peking was made famous by the Irving Johnson film Around Cape Horn which documented her 1929 passage around the southern tip of South America in hurricane conditions.

The Peking was retired in 1975 and sold to Jack Aron, for the South Street Seaport Museum. However, the Museum does not have the Peking included in their long-term operational plan. In 2012, an offer was made to Hamburg, to return the ship to its port of building as a gift. The plan was not successful as the effort to raise an endowment in Germany to ensure the preservation of the vessel fell short.

The photo on the postcard was taken on November 20, 2011 when I traveled to New York City with a JetBlue unlimited BluePass. The ship, still moored at the South Street Seaport as of 2013, is in need of extensive repairs. The museum is opening Peking to the public every Saturday 12:00 - 4:00 pm from September 7 to October 19, 2013 with $5 suggested donation. With its future uncertain, today (October 12) and next Saturday (October 19) may be your last chances to visit the ship on board.
Posted by twimbk at 2:38 PM