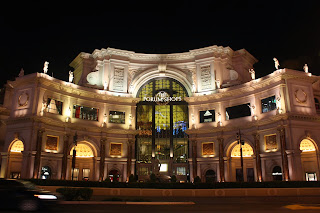 Postcard US-1940143 to Taiwan has expired for 365 days and is about to fall off the face of the PostCrossing Universe. The recipient sent five postcards and failed to register any. So there are at least four other cards got lost alongside of mine.

The postcard shows the Forum Shops at Caesars, a 636,000-square-foot or 59,100 square-meter luxury mall in Las Vegas, Nevada. Connected to Caesars Palace Hotel and Casino and built as an extension wing of the hotel, the mall now fronts on The Las Vegas Strip as shown on the postcard. The mall has more than 160 stores that line up simulated ancient Roman streets dotted with replicas of the Trevi and Triton fountains, statues and facades. It is also noted for its majestic spiral escalators by the massive reflecting pool at its entrance.