October 10 is the Double Ten Day that celebrates outbreak of the Wuchang Uprising in Hubei Province, China in 1911. It began with the local dissatisfaction about the nationalization of railway lines, and soon became a crisis and escalated to an uprising that ended the Qing Dynasty and ushered in the Republic of China (ROC) in 1912. Following the Chinese Civil War, the Communist Party of China took full control of mainland China and founded the People's Republic of China (PRC) in 1949. The ROC relocated its government to Taiwan and continued to recognize the Double Ten Day as the National Day of ROC,

The island of Taiwan, formerly known as "Formosa", was mainly inhabited by Taiwanese aborigines until the Dutch settlement during the Age of Discovery in the 17th century, when ethnic Chinese began immigrating to the island. The shaped postcard, showing a historical map of Taiwan around that time, was one of my earliest postcard collections. It was acquired when I was in Taipei to attend a joint conference GIS AM/FM Asia'97 & GeoInformatics'97: Mapping the Future of Asia Pacific. held from May 26 to May 29 in 1997. It was mailed back to the US and had a postmark dated on June 3, 1997. 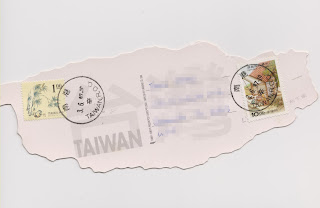