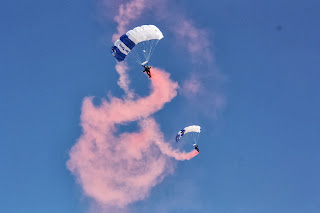 The jump demonstration shown on the card was performed on November 14, 2010 at the Aviation Nation, an annual public open house at the Nellis Air Force Base. However, the Aviation Nation scheduled for November 9 and 10, 2013 has been canceled due to the budget cut.
Posted by twimbk at 11:58 PM