The Fittest City in the U.S. 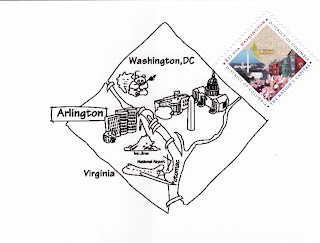 The American College of Sports Medicine and the Anthem Foundation have considered such factors as what percentage of the city's population reporting exercising within the past 30 days and accessibility to parks and green spaces, in order to determine how fit a city is. The top 10 cities are:

Postcard US-3971221 to Germany shows a black and white map drawing of the D.C. area with a matching diamond shaped 37¢ commemorative stamp issued by USPS on September 23, 2003.
Posted by twimbk at 11:52 PM