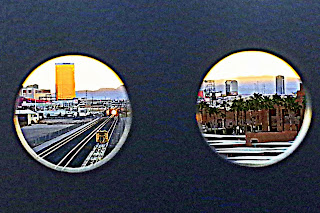 Real estate developer Donald Trump is poised to become the presumptive Republican presidential nominee after his decisive win in Indiana, which led Ted Cruz to drop out of the race.

Postcard US-3620197 to Germany shows a view, from a pedestrian bridge over the Union Pacific Railroad in down Las Vegas, with the Trump International Hotel Las Vegas, a 64-story luxury hotel, condominium, and timeshare, appeared on the left opening. Named for the real estate developer, the property is distinctive as the exterior windows are gilded with 24-carat gold.
Posted by twimbk at 11:51 PM