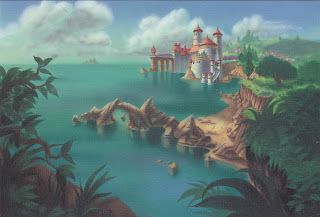 Postcard US-4002447 to the United Kingdom shows Prince Eric's Castle from a 1989 Disney movie the Little Mermaid based on a Danish fairy tale. It tells the story of a beautiful mermaid princess who is dissatisfied with underwater life and dreams of becoming human. The film's success marked the beginning of the era known as the Disney Renaissance.

The card is part of the Art of Disney: the Renaissance and Beyond (1989-2014). The castle may have been inspired by Chillon Castle, a medieval fortress on the shores of Lake Geneva in Switzerland. Attraction Under the Sea: Journey of the Little Mermaid opened on June 3, 2011 at Disney California Adventure Park in Anaheim, California, and on December 6, 2012 in New Fantasyland at Magic Kingdom, Walt Disney World in Orlando, Florida.