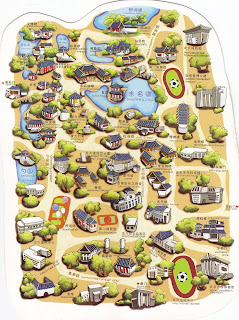 The university moved to the current site in 1952, the former campus of Yenching University, It was the site of royal imperial gardens in the Qing Dynasty. On the map, you can see many historical structures such as the West Gate, beautiful natural landscape such as the Weiming Lake, as well as the academic buildings such as the library.
Posted by twimbk at 11:27 PM