The Centennial of Ellis Island 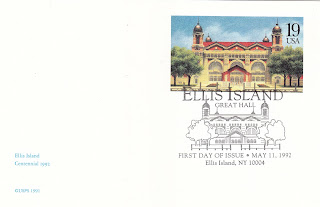 According to the Palm Beach Post, USPS honored the centennial of Ellis Island on May 11, 1992 with a 19-cent historic preservation postal card. First-day ceremonies were held at 11 a.m. just outside of the Great Hall's Museum. The card's indicium, the imprinted stamp with 19-cent pre-paid postage, was designed by East Norwich, N.Y., artist Howard Kos-low.

From its opening in 1892 through 1954, more than 12 million immigrants were processed through Ellis Island, located in Upper New York Bay. Today, we celebrate its 124th anniversary.
Posted by twimbk at 10:59 PM